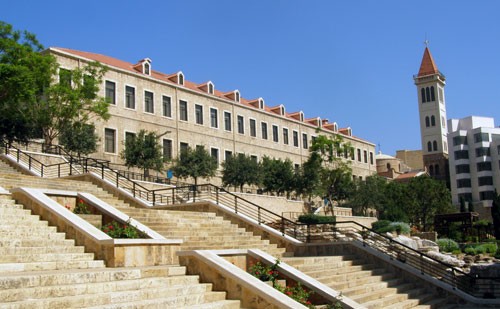 The United States’ approach to Lebanon seeks to reconcile two
often conflicting policies: supporting the Lebanese state, army, and government, while pursuing a maximum pressure campaign on Hezbollah. During the past months, the “Iran lens” defining US policy has overshadowed the commitment to supporting stability and building state institutions in Lebanon. This was clear in the sanctions against Jammal Trust Bank in August, leading to its closure, and in the deliberate delays in releasing military aid until December 2019.

This binary approach, and Hezbollah’s response to it, climaxed during the government formation process this January. Hezbollah and its allies, who face looming sanctions, managed to produce a government that is acceptable to the US and the international community, and so could receive a green light for external assistance—if and when it succeeds in passing necessary reforms.

Many observers had anticipated an escalatory response following the early January assassination of Iranian major general Qassem Soleimani, a personal friend of Hezbollah secretary general, Hassan Nasrallah. Instead, there was a conscious effort on the part of Hezbollah to avoid confrontation through this government lineup. For the first time since the party entered government in 2005, Hezbollah lacks direct representation in cabinet. And, for the first time since the Syrian era in the 1990s, a foreign minister has been appointed who has no known bias in favor of the Syrian regime or Hezbollah. That the majority of ministers are also US citizens could also be seen as a sign of appeasement.

Given the inflexible and authoritarian nature of Lebanon’s political class, Hezbollah included, this is a rather exceptional effort and compromise in government formation. The timing of the new government, announced just over two weeks after Soleimani’s assassination, says volumes about the level of Hezbollah’s fear of the repercussions of a Lebanese financial meltdown and the desire for a bailout.

This policy also reflects the changes in the organization’s nature; Hezbollah has been playing an active role in managing other battlefields. The group has become a hybrid between a political party and a “consultancy” with an elite fighting force. In a nutshell, Hezbollah no longer wants Lebanon to be a proxy battleground, as it has been since the 2000 Israeli withdrawal, and would like the US and Israel to meet it half-way. The response to the Soleimani killing will be restricted to expelling US forces from Iraq. Hezbollah has and most certainly will play a role, at least politically, in uniting Iraqi Shia factions against the US presence. Whether the US will confine this confrontation to Iraq, rather than escalating in Lebanon, remains to be seen.

Although the US administration seems keen on de-escalating, unilateral, erratic policy decision-making could suddenly shift gear. With two secretaries of state, two defense secretaries, and four national security advisors in three years of this presidency to date, one should not expect coherent or consistent foreign policy in the region. The exception is only when this foreign policy is a factor in local elections, such as the “Deal of the Century,” and the maximum pressure campaign on Iran, given its significance to the Trump pro-Israel evangelical electorate. The Soleimani assassination, months before the US elections, is case in point. Such unpredictability might impact what seems to be a consistent US policy in Lebanon.

Trump’s administration is reportedly considering expanding its sanctions, likely through the Global Magnitsky Act, to include corrupt politicians and their known business cronies. Such an escalation might devastate what little trust the Hassan Diab government has. If, however, the sanctions are designed to target high-ranking members of the corrupt elite—though not at the level of senior political figures—they could go further than any cabinet in meeting the protestors’ demands. Given the current composition of Parliament, it is highly unlikely that the new cabinet will effectively take on corruption. This is why some DC pundits believe that sanctions against the corrupt elite could empower the current cabinet, and create space for more daring reforms. Regardless, this new batch of sanctions is overdue and could impact US policy in Lebanon. For now, external assistance awaits reforms, and the US could act as a facilitator if and when these changes take place. The first sign of this conditional engagement will be when the US Ambassador Elizabeth Richards visits the prime minister, once his government wins the vote of confidence.

The post The US approach to Hezbollah and the new Lebanese government appeared first on Executive Magazine.