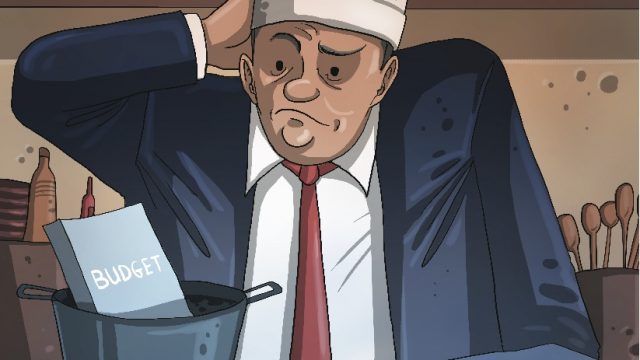 The 2020 budget was expected to be a main pillar of the multifaceted crisis management plan that citizens have taken to the streets to demand. In reality, it fails to meet the urgency of the financial crisis—in fact, the current situation is not referenced at any point in the budget law.

The budget approved on January 27 targets a LL6,336 billion fiscal deficit or 8.73 percent of GDP (assuming the economy stagnates in 2019 and contracts by 15 percent in 2020). This is the result of a 15.55 percent drop in budget expenditures and a 11.08 percent drop in revenues when compared to a projection of 2019’s figures. This is a clear attempt to maintain the appearance of relatively stable public finances by conducting an artificial curb-down of public spending.

A key pillar of this reduction is a gentleman’s agreement involving the Ministry of Finance (MoF), the Association of Lebanese Banks, and Banque du Liban (BDL), Lebanon’s central bank, to drop the government’s debt servicing cost without setting it within a clearly-stated, medium-term debt strategy as part of a crisis management plan. No indication was given of the type of operation underlying this agreement, but sources have indicated that it involves an 80 percent haircut on lira bond coupons, and so reduces public expenditure by LL4,500 billion. This measure represents a selective default on Lebanon’s local currency sovereign debt, more than 50 percent of which is held by BDL.

The government has been fully reliant on BDL to cover its deficit since the third quarter of 2018. This use of monetary policy to cover for fiscal spending, and transfer of the government’s deficit to BDL, has led the country to its current financial position and has depleted BDL’s foreign exchange reserves. This year will see a continuation of that trend and its public deficit will be financed through freshly printed lira notes, with near zero interest rates, from BDL. This would lead to a steep rise in inflation—with money demand collapsing, and bank liquidity unavailable, BDL might not be able to sterilize this new injection of liquidity as it has been doing before.

Another contributor to the drop in expenditures is a 40 percent drop in transfers to Electricité du Liban (EDL) compared to the 2019 budget. Given that there is no official change in EDL’s pricing model, this measure will result in more power cuts. The last major contributors are cuts in current spending that do not take into account the effect on the operations of their corresponding state-owned entities, in addition to a sharp drop in capital spending that will put even more pressure on Lebanon’s ailing infrastructure. Reducing expenditures adopted in a multi-year program, and delaying them to 2021, cannot be considered a serious policy. This approach reveals the inability of the authorities to set priorities and public spending policies.

On the revenue side, the government’s figures rightfully factor in a double-digit economic contraction. However, the rise in civil disobedience—mostly tax payment boycotts—would further limit the MoF’s ability to collect these taxes.

What Lebanon urgently needs is an “emergency crisis management team” to coordinate with local and multinational players in designing a macro-fiscal-financial plan to avoid the hardest of landings. The plan would start with restructuring the stock of public debt (both the MoF’s and BDL’s) to a sustainable level, given the amount of expected financial flows in and out of the treasury and the country as a whole. These flows are a function of the broader macroeconomic plan the cabinet must put in place to bring Lebanon back to its potential economic output.

Furthermore, the government should consider a better distribution of its expenditures. More specifically, funds should be allocated for a social safety net to protect those affected by the sharp economic contraction resulting from the ongoing crisis.

The 2020 budget was a missed opportunity to signal to citizens, donors, and the market that the government had decided to face the elephant in the room. As adopted, it will likely aggravate the crisis and lead to an inevitably larger correction further down the line.

The full brief by Kulluna Irada on the 2020 budget can be accessed here.