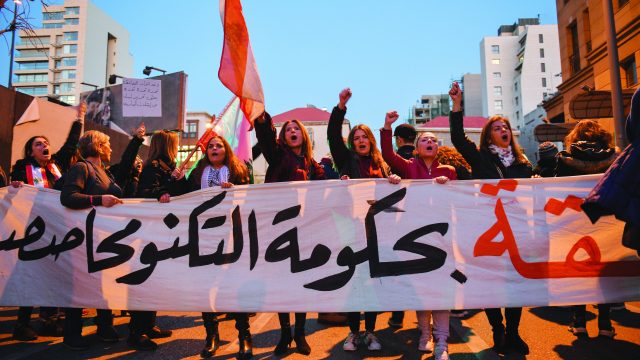 When crowds began to gather in Downtown Beirut on that fateful evening on October 17, 2019, few could have predicted that, a 100 plus days later, Lebanon would be still in the furrows of a revolt with almost daily protests across the nation, several clashes between protesters and party shabiha, and with riot police—and road closures, not as common but still very much in the protesters’ arsenal.

It is a testimony to the determination of the Lebanese and their unrelenting hope for a better tomorrow—namely to live in a country where their basic rights are guaranteed—that the thawra (revolution) is still alive and kicking.

Over the course of its 100 days lifespan, Lebanon’s revolution has achieved a lot of which to be proud. Those successes include: the resignation of then-Prime Minister Saad Hariri’s cabinet; the cancellation of the November 19 parliamentary session with a controversial general amnesty law on the agenda; the people’s Independence Day parade on November 22, when thousands of Lebanese gathered for a real celebration of their country; and the victory of independent candidate Melhem Khalaf in the Beirut Bar Association’s presidential election. Most importantly, the uprising has allowed a large percentage of Lebanese from all parties and sects to transcend their narrow political beliefs and awaken to their power to hold any corrupt politician accountable.

But the thawra has also had some disappointments, especially in this new year. Against the objections of many protesters, Prime Minister Hassan Diab’s Council of Ministers was formed (see leader) and the 2020 budget was passed by Parliament (see comment), despite questions over its constitutionality. Police brutality was on the increase in January (see Last Word), and there are very real efforts by both this government and the previous caretaker one to quell the demonstrations. Rumors that the uprising has been funded or hijacked by those who don’t have the revolution’s interests and priorities at heart abound, and indeed are sometimes true—although the vast majority of protestors remain the same sincere and committed group as day one. Thawra fatigue is also a threat as a growing number of people who are disheartened by the latest events and fearful for their economic future—a fear that underpins the cautious decision by many to give Diab’s government a chance to address the financial crisis.

This coming period is therefore critical for Lebanon’s uprising and is its most difficult test yet. Protesters survived the first four months on an adrenaline rush of accomplishments and unity, but the next phase won’t be as easy. Lebanon’s protesters must not lose hope, and must remind themselves of their accomplishments and their power to effect change through persistence.

They should also keep in mind their core demands have not changed. The first, the resignation of Hariri’s government, was achieved early. The second, for a small, transitional cabinet of independent technocrats was not, and protests continue against Diab’s government. In Executive’s view, however, it is advisable that protesters save their energy for their final demand: a new electoral law and early parliamentary elections.

While Diab’s government leaves a lot to be desired, working toward its resignation would only waste time that we no longer have. Protestors cannot entrust the same people they deem corrupt to form a government that does not look like them. They have already failed to do so once, and there is no reason to believe they would do better the second time around. Lebanese should instead continue to call and pressure for early parliamentary elections under a law that would ensure fair representation. It is then that they can put their money where their mouth is and run for elections or vote in parliamentarians that truly represent their voices. Changing the system from within has proven the world over to be more effective than overthrowing it without providing alternatives, and so this is where the next phase of the thawra should be heading.

The road to a successful revolution is a long and winding one. Things don’t need to look the way they did on day one or even day 50 for them to still be on track. Contrary to the views of some, the revolution is not weakening because it is not manifesting itself in daily protests and road closures as it did in the first week. While protesters know they will always have these very effective tools in their box, it is ok for them to decide to monitor the situation and use them only when needed. It is also perfectly acceptable, even necessary, for some of them to choose to work within the system, pushing for parliamentary elections, and then legislating for a Lebanon where all citizens can live with dignity.

The post Reflections on the Lebanese revolution appeared first on Executive Magazine.