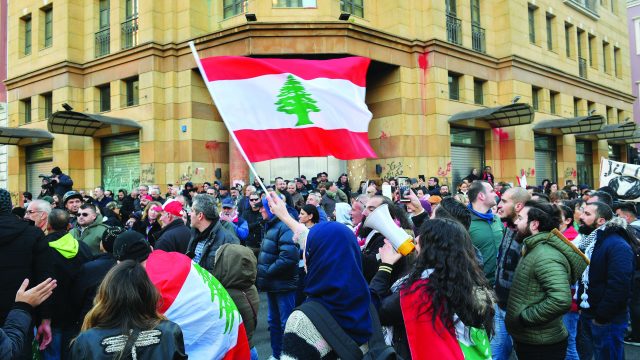 Lebanon has a new Council of Ministers. This is, from one perspective, a clear and present improvement. Having a government as a sovereign state is an absolute and total prerequisite to function as a country in the global concert of nations. In this sense, the serial failures of Lebanon to swiftly move and empower new governments have been a harmful systemic factor.

In 2020, however, any repetition of the mistake of dismissing the importance of a government or revolting against the idea of political authority while striving for systemic change could be fatal for Lebanon.

Does the designation of Hassan Diab and the new government meet the demands of the thawra (revolution)? The answer is a resounding no. Cabinet formation was not independent from the embedded wrangling of power factions. The 33 days it took to form—and the 84 days without a government in a time of national economic crisis—are a testament to that.

Questions of legitimacy aside, this government must now tackle the immediate emergency of Lebanon’s financial crisis.

In the minds of Executive editors, there is actually no full confidence that this government will be able to achieve this highly challenging task and live up to the economic rescue needs that are to the greatest part the outcome of past mismanagement of the political economy and the failure to navigate regional circumstances and global policy challenges. However, Executive editors are fully affirmative that no economic rescue for Lebanon can be mounted without a government.

Without a baseline rescue, neither a revival of economic growth nor a sustainable level of basic social security are in reach for an unpredictable number of years. Consequently, also no valid, peaceful, and sustainable new social and political contract can be achieved, if Lebanon fails to mount an economic self-rescue with the aid and supportive infusion of policy discipline from the international community. Therefore, we call for the government to be empowered—but watched at all times, and prodded by society toward longer-term implementation of due systemic innovations.

Furthermore, we see that this dynamic mandates to engineer a transition from ministries as token castles under secto-political fiefdoms to mission-oriented and topically driven ministries whose importance is determined by the changing needs of the entire polity. This means, in turn, that many ministries, which have crucial functions for social development, longer-term economic growth, and the improvement of living conditions for all Lebanese (e.g., ministries covering needs from health, culture, social affairs, labor, and education to ministries entrusted with urban planning, transport, agriculture, industry, digital transformation, and tourism) are not the ministries that warrant most scrutiny in the immediate term. Scrutinizing and reforming these ministries will be a priority in the mid-term—if the Diab government lasts that long.

For many Lebanese citizens—including notable priorities by members of the wider Executive team—the ministries of justice, interior, and defense have vital roles that warrant the people’s near-term attention, a fact that, in our views, obliges the respective ministers to improve their interaction with the public and become highly accountable.

The ministries that are the front line wardens of any economic rescue efforts with international involvement, however, are, in the immediate term, and besides the prime minister’s office, the ministries of finance, foreign affairs, and—with some lag—economy.

Noting the need for a salvation without individual savior—which in 2020 is a clearer and different understanding of the national need than what existed three decades ago at the start of the Hariri years—the current priorities for Executive editors are to have a government, to understand that not all ministerial portfolios in this government are created equal, as some are existential for economic survival, and to pursue the priorities that need to be met.

In a sane country with a high-efficiency government, there are as many ministries as needed and their number is infrequently adjusted according to foreseeable needs of the polity. Rational design of ministerial portfolios, by contrast, has not been the case in most, if not all, of the more than 60 Lebanese governments of the past 77 years. Certainly, during the last 30 years, responsibilities and distribution of line ministries and minister or state positions were determined in power allocation contests.

To depart from this unproductive past, today’s practical route toward having an efficient government should, in Executive’s opinion, start with understanding the priority needs of the country and emphasizing on the ministries that can fulfill these needs, instead of arguing over the technocratic qualifications or hopefully incorruptible characters of ministerial position holders that have a substantial chance at disappearing from the political responsibility scene without having made deep impact—as can be the case in governments elsewhere.

Given the primacy of economic rescue, and the indispensability of a government for dealing with international rescue partners, Executive vows that it will maintain scrutiny on actions by the ministries that deal with these matters. We further call upon the advocates of sustainable change and thawra stakeholders in the fight against governmental waste, inaction, and corruption to exert top scrutiny on every minute action by those currently crucial ministries and hold off from wasting time on moves criticizing the government generically or re-uttering demands that cannot in practice be tackled while the country economically is under the current extreme duress.